On Veterans Day October 25, 1971 at least seventy active duty military personnel, veterans and supporters rallied in the rain at a gate to Westover Air Force Base in Chicopee, Massachusetts. WAFB, home to the 99th Bomb Wing, was being used to support the war in Vietnam.

One of the main speakers at the rally was Airman [sic] First Class (AIC) Pat Turney, representing the GIs present. She called for an “immediate end to the senseless waste of human lives in Indochina.” She also called for unity, urging GIs, veterans, and civilians to stand together against the war.

There is a photograph of the event that was printed in the Base’s alternative newspaper, 99th Bummer . Two women can be seen on either side of Turney on the platform. The woman on the left, Sgt. Pam Speers, co-signed for the rally permit and had been active in producing the newspaper and creating a GI drop-in space.

After Armed Forces Day in the previous spring, a group of active duty Westover Airmen had started 99th Bummer. An alternative monthly, 99th Bummer included radical articles from similar groups around the country as well as ongoing critique of the Air Force Base and its role in the War. Calling themselves the Westover Action Project, the group rented a space off-base. In September, they opened a drop-in center there for military personnel. Off the Runway, as it was called, provided recreation as well as legal counseling and counseling for addiction. 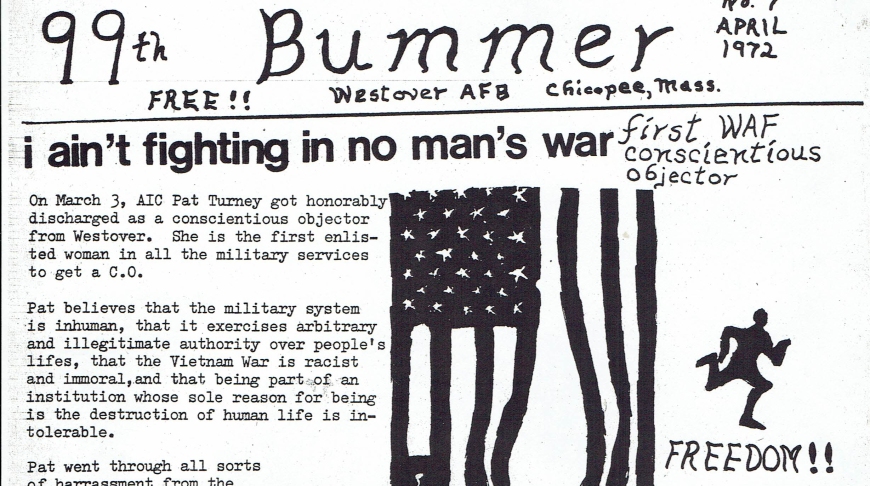 Westover AFB Command reacted by removing four activists they could identify from their Air Force jobs; Speers and Turney and two men who worked at the Base newspaper with Speers. The activists brought a suit through the ACLU, but the Air Force discharged three of them, including Speers. The fourth, Pat Turney, applied for Conscientious Objector status. She needed Congressional pressure to get WAFB to follow the process to earn a March 2, 1972 honorable discharge as the first U.S. enlisted woman Conscientious Objector.  A letter of support from Representative Bella Abzug  to Turney was printed in 99th Bummer.

Speers and Turney, and other women in the Project not mentioned here, went on to become part of the feminist rebellion in Springfield, helping organize the Springfield Women’s Center and the Hotline to End Rape and Assault (HERA) among other actions. Some of them came out as Lesbians and were part of the network connected to Northampton. Pat Turney became known as Banshee and co-founded Northampton’s first women’s self-defense and karate school in 1976.

2 thoughts on “WAFs Against the War”