In spite of the continuing threats of murder, arson and unspecified violence from those anonymous males calling themselves SHUN (Stop Homosexual Unity Now) the Gay and Lesbian Activists (GALA) organizers of the Northampton March stepped up efforts to ensure that the event happened a second year, 1983. The March was given an official name , for Gay and Lesbian Rights, with snazzier artwork  for publicity , and, once again, scheduled for the second Saturday in May. Organizers aimed to bring out at least a thousand supporters. They made efforts to build a broad coalition as well as to protect the marchers.

Invitations to participate were sent not only to progressive groups around the state but also to each of the City Councilors.  For the first time, endorsers were sought to buy a full-page ad in the Daily Hampshire Gazette. Only three hundred donors were needed to pay for it. When it was published the day before the March, it included the names over 600 individuals and groups.  It read, in part:  “The harassment, the threats, the violence directed at gays and lesbians appalls and frightens us. But like the intended victims of this campaign of hate, we are not silenced.” For a history of that previous year of threats of violence see the previous blog post “The Backlash to the First March.” https://fromwickedtowedded.com/2020/05/09/the-backlash-to-the-first-march/

Supporting the right of all people to be free from harassment and fear, the endorsers called on everyone (including straight people) to “Come Out for Justice.” Close to 90% of the endorsing organizations were not focused on gay issues. They came from Boston, Connecticut, New Hampshire, and Western Massachusetts as well as more than thirty Northampton groups and businesses .

This first “signature ad” in some ways made up for City government’s foot dragging. The day before the second March, Northampton’s Mayor Musante released a statement on civil rights, but neglected to endorse the event. He had also dissolved the Lesbian/Gay Task Force created to address the communities’  concerns about increasing violence and lack of City government and media responsibility. After only two meetings, he was satisfied it had accomplished all that was needed.

Those anonymous male phone callers identifying themselves as SHUN had threatened to disrupt the March. As March endorsers became public, they, too, were targeted with threats. This included New Jewish Agenda, Hampshire County NOW, Northampton Law Collective, Circa Counseling, and Women’s Community Theatre.

Log of phoned threats on GALA phone answering machine for May 9, 1983.

In the weeks leading up to the action, a Hatfield man announced in the Daily Hampshire Gazette that NOAH, his newly formed group, would counter-demonstrate that day. The scheduled event also received unanticipated attention when local TV station Springfield Channel 22 aired a five part documentary report the week before the March. “The Changing Lives of Lesbians and Gay Men in the Pioneer Valley,” by Vivian Sandler , included segments on family, religion, culture, and oppression.

For the first time, GALA put out a call for several dozen people to be trained in non-violent intervention and serve as peacekeepers at the March. Over fifty volunteers responded to keep potential conflicts from getting violent. They would appear at the March and the rally to follow it in turquoise T-shirts. Printed on the back of each T-shirt: “An Army of Lovers Can Not Fail.”

On May 14, 1983, an estimated 2,000 Lesbians , gay men, and supporters turned out to march a circuitous route from Bridge St. School, past City Hall, to Pulaski Park. This was twice the number of marchers anticipated and two to four times that of the previous year. Sherman Boyson, reporting in the Pioneer Valley Peoples Gay Alliance newsletter the Gayzette, found the number of people, with their clever disguises and purple balloons, overwhelming.

The handful of counter demonstrating members of NOAH, “National (Hatfield) Organization Against Homosexuals,” couldn’t believe there were so many ”homosexuals” in the Valley and accused the organizers of bringing them in from out of state. In fact, the great majority were from the Valley, many of whom were “out” at home for the first time.

The singing, chanting, sign-carrying and waving marchers included some people in masks and facepaint (no paper bags this year), babies pushed in strollers, and an occasional gay or lesbian dog.  Among the groups with banners were Womonfyre Books, the Valley Women’s Voice, and many others who had been threatened with violence. The hit of the day was the large banner carried by Lydia Nichy and Mary Patierno of Northampton. In a direct response to SHUN’s Stop Homosexual Unity Now, the banner read “Stop Heterosexual Intolerance Today,” or SHIT.

Ward 2 Councilor William Ames, one of the few Republicans on the town’s governing body, had, right up to the day of the event, hesitated to join the March even though he had publicly endorsed it. He explained in a DHG story that he had received such angry phone calls in response to the anti-violence statement he had introduced to City Council (which failed to pass) that he feared for his family’s safety. Setting such apprehension aside, however, he joined the passing marchers, becoming the first city official to do so. His colleague, Councilor-At-Large Edward Keefe, became the first official to demonstrate in opposition. The Democrat stood on the sidewalk with NOAH. Other counter demonstrators included about a dozen people from Rev. Paasch ’s Faith Baptist Church in Florence.

The names of endorsing groups were read out at the rally. One precedent-setting list was read by Senator John Olver’s aide Stan Rosenberg, who had called local politicians to poll them about their stance on the March. In addition to several from Amherst and Charlemont, the endorsers he gathered included Olver, Representative William P. Nagle, Northwestern District Attorney Michael Ryan, County Commissioner Robert Garvey, Northampton School Committee members Maria Tymoczki, Susan Peterson, and John Lawlor, and Forbes Library Trustee Russell Carrier.

Although the City Clerk had declined an invitation to set up a voter registration table at the rally, office hours were extended that Saturday so marchers could register. At least thirty Northampton people took advantage of the opportunity and signed up at the City Hall, a few doors away from the Pulaski Park rally. 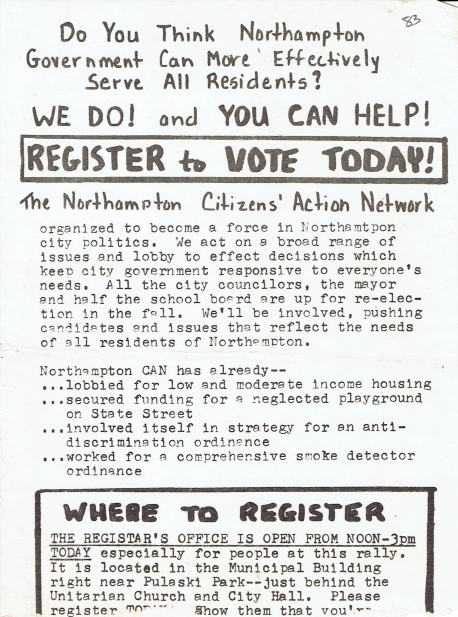 In spite of threats, the event was enthusiastically joyful. SHUN never made its presence visible. Peacekeepers silently surrounded several groups of heckling teenage boys, who shut up and retreated. One bike-riding boy shouted “Kill Lezbos” as he raced past marchers but other bikers with anti-lgbt  signs riding through the rally remained quieter.  The celebration continued that night with a dance. Lesbians and gays were now rallied for the actions needed in the coming year to push back the homophobes  and end the threats of violence.

Boston Globe coverage of March, May 22, 1983. Rare photo that includes two of the three women who were to bring charges against a male harasser in the coming year, Kiryo Spooner and Kim Christensen.

__Gay and Lesbian Activists. Northampton MA. Flyer for the March. May 14, 1983. Artist Unknown. 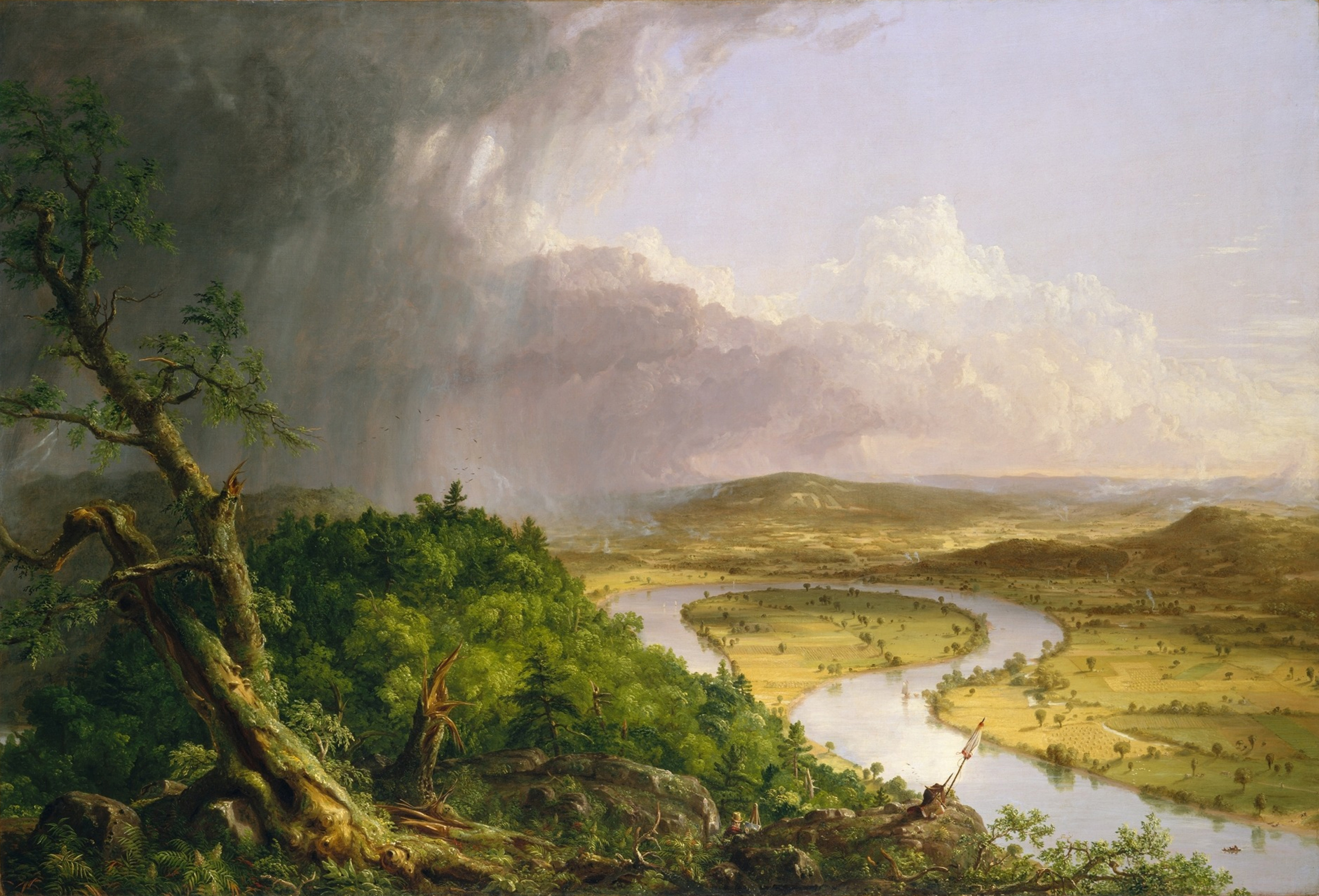