The club was really wimminspace in downtown Northampton—what Smith College might have been.  It was a place where wimmin could go and hang out and find someone to talk with and it didn’t matter age, race, class, appearance, etc. It was a center for lots of communication about feminist events and issues.

I joined the Common Womon Collective in the early spring of 1978.  I was part of the second collective group, which was recruited when the original collective felt that the food service and community support efforts were well launched and they were ready to move on to other pursuits. Some of them stayed to oversee the Ceres Inc. business.

The application process to join the collective involved a letter or essay about one’s personal philosophy of feminism and lesbian identity, as well as an interview with collective members.  Cooking skills and restaurant experience were a part of this but only a part. I can’t quite remember all the names of the collective members.  Of course Kate Angell and I had major responsibility for things for a couple of years, and we also had several UMass graduate students. Emma Missouri was also a part of the group and others about whom I remember odd details and bad habits.

I never knew when I answered the phone who would be on the other end and what they would ask or tell me.  It could be Robin Morgan or a UMass student or Frances Crowe or anyone.  I felt very much in touch with what was going on in the area and in the country when it came to what was important to wimmin.  Some of it was purely social, which was fun, but some of it was political—female genital mutilation, for example—but it was being a part of a movement as well as cooking.

The Common Womon collective Sep 1979. Photograph by Kathryn Kirk and used by permission. Marjorie is at the top left. Originally published in the Valley Women’s Voice.

While I was cooking at the Common Womon Club as a collective member we served an evening meal every day except Monday (when the collective met,) and the Sunday night meal was usually prepared by a guest cook who was a club member. These included intro’s to a wide variety of ethnic food.  Sundays we served brunch as well as the evening meal.  I cooked for most of those brunches between 1978 and 1980.

When I think about the club and the collective, I remember all the mornings when I would unlock the door and get the food started for the day and then have all sorts of people drop in and talk.  I really learned to organize my tasks, which academics (which I was at the time) are not very good at but nurses (which I later became) have to be very good at.  I would get the bread started, then get a soup started, then get a dessert going.  The dessert would bake while the bread rose and the soup simmered.  By the time I got the bread in to bake, the soup would be done.  Then it was time to prep the entrees for the evening.  Cutting up the salad happened mid-afternoon, and the quiche would bake during that.

A typical evening meal would offer a choice between two soups, salad, three entree choices and desserts.  Among the most popular soups were butternut squash and cream of potato, and we also made a vegetarian chili.  We always had a quiche of some sort, an Italian dish such as eggplant parmigiana, and other pasta or rice-based dishes.  We often made Chinese spring rolls, and occasionally we had a fish dish.  For dessert we tried to make honey-sweetened or maple fruit pies and cobblers, but we often fell back on commercial, sugar-sweetened ice cream as a topper.  Tea, coffee and fruit juice were served.  For brunch we had purchased bagels, but we also had eggs and omelets and pancakes made to order. We always had mixed grain bread that we made on an almost daily basis. 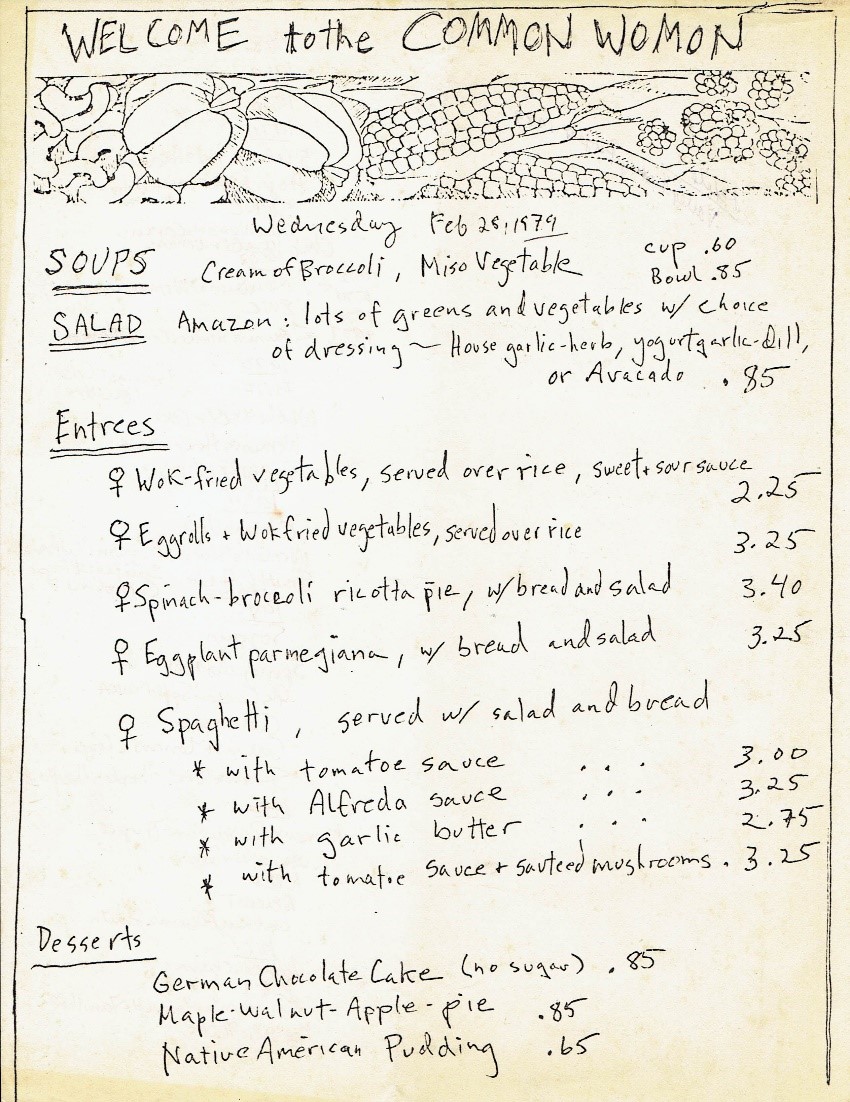 I usually didn’t stay to serve dinner if I opened up, but I had the line-up ready for whoever came in at mid-afternoon for that.  I would run the menu over to the copy place before I left and always enjoyed that walk along Main Street, seeing folks and feeling connected to the business part of Northampton.

The busiest times were when there was a concert or dance featuring wimmin artists.  We would serve as many and as fast as we could so that everyone could go. These were great times to dress up and enjoy the dating scene.

Editor’s note: Another post from Marjorie, on CWC in 1980s, will be published in the further unwinding of the narrative.

Marjorie Childers is a Professor Emerita of Nursing at Elms College in Chicopee and former director of the nursing program there.  She is a quiltmaker and retired quilt appraiser, certified by the American Quilters Association. Currently living in a retirement community in Holyoke, she remains committed to women’s history and women’s art. She notes re. her experience at the Common Womon, “ It’s complicated. I think about the club whenever I am in the kitchen, especially when cleaning up. Some of that discipline will never leave me.”

Additional history:  Northampton’s Common Womon Club (1976-82) existed within the context of a national feminist restaurant movement. Jan Whitacker provides an overview of this movement, as well as earlier First wave feminist restaurants, in a 2013 blogpost “Women’s Restaurants.” Included are links to other related content she’s written on the 70s and about vegetarianism. https://restaurant-ingthroughhistory.com/2013/06/18/womens-restaurants/?fbclid=IwAR1w8_8sbhhyJvmNYOAXJCMC9NHcfFKyvVQEKAj98LeDp37uG2mWRFLppUc

There’s been a plethora of mainstream interest in the subject of feminist (and lesbian) food in recent years.

A wonderful post on political potlucking appeared in Atlas Obscura.com:  “How Lesbian Potlucks Nourished the LGBTQ Movement: Now a queer stereotype, the lesbian potluck has radical roots” by Reina Gattuso. May 2, 2019 https://www.atlasobscura.com/articles/why-do-lesbians-have-potlucks-on-pride.

The same columnist posted on a scholarly project on feminist restaurants: “The Scholar Mapping America’s Forgotten Feminist Restaurants: Challenging patriarchy, one eatery at a time” by Reina Gattuso. June 21, 2019. https://www.atlasobscura.com/articles/feminist-restaurants. The feminist restaurant project is quoted in the article, ” From the 1970s to the 1990s, according to Dr. Alex Ketchum, a professor of gender, sexuality, and feminist studies at McGill University, at least 250, and perhaps as many as 400, feminist restaurants, cafes, and coffeehouses opened in the U.S. and Canada. Almost all of these restaurants are gone. But for two decades, establishments from Alabama’s Steak n Eggs to the Canadian Yukon Territory’s Rendez-vous Coffeehouse challenged women’s traditional consignment to the home by reclaiming cooking for the feminist movement. The feminist restaurant was “a place where community could be built around food,” Ketchum says. “Places where cooking wasn’t antithetical to women’s liberation.”

More about this history project can be discovered at their webpage http://www.thefeministrestaurantproject.com/p/home.html. Of interest to me was inclusion of the Valley in their mapping of those hundreds of restaurants. From the updated directory;

-The Women’s Restaurant (probably referencing the Common Womon Club before it had its name) (1977).

The oldest and still existing feminist restaurant, Bloodroot in Connecticut is the subject of a documentary film released this spring (2019). Here reviewed in Variety; “ Film Review: ‘Bloodroot’; An affectionate portrait of both a long-running feminist restaurant and bookstore and its two still-active founders“ by Dennis Harvey https://variety.com/2019/film/reviews/bloodroot-review-1203194133/

Variety editors conjectured that the Bloodroot film was prompted by the New York Times observance of the restaurant’s 40th anniversary two years ago with a tribute article “Mixing Food and Feminism, Bloodroot Is 40 and Still Cooking” by Tejal Rao, March 14, 2017. https://www.nytimes.com/2017/03/14/dining/bloodroot-feminist-restaurant.html.

One thought on “Working in the CWC Collective”