One night in 1974, Adrienne Rich and Robin Morgan slept over at my house.  They stayed in room #9, rented in the name of Käthe Kollwitz by five of us lesbians, at the 66 Green Street  rooming house in Northampton. For a year that room on the third floor functioned as a common space and as emergency housing offered through the two local women’s centers and word of mouth in the lesbian community.

The occasion for Adrienne and Robin’s visit to the Valley was the National Women’s Poetry Festival, a weeklong extravaganza of what I later realized were a tremendous number of the finest feminist voices in the country. It was an inadvertent introduction to an art that I came to treasure.  I began to seek out then hard-to-find, slim volumes of truth-telling, which hadn’t been included in my recent college education.

(Poster was created by me. I didn’t want to take credit because I think it’s poorly done. I meant it to be a representation of the Triple Goddess using as models Maid__myself, Mother__Coretta Scott King, Crone__Georgia O’Keefe.)

I was familiar with Robin’s rabble-rousing from two previous Valley appearances. That’s what prompted me to volunteer the Kollwitz room as her housing when the call went out from the Feminist Art Program, the Festival organizers who had a desk in Everywoman’s Center’s immense office space where I also worked. Thus, I was also handy when the woman who was to pick Audre Lorde up at Bradley International Airport had car trouble. I was dispatched at the very last minute to get this other poet I had never heard of and take her directly to the auditorium at UMass for her reading.

Green Street guests Adrienne and Robin were gracious about twin mattresses on the floor, the shared toilet down the hall, even the instant coffee served for breakfast. Later in the year, I would welcome several Kollwitz room guests referred by Robin, women from out of state desperately in need of refuge.

After Adrienne returned home to NYC, she mailed me a handwritten note of thanks accompanying a check in the amount of her Festival honoraria to be used for the local women’s community.

Adrienne wrote, in part, “I want to thank you for a glimpse of possibilities in living & creating with other women… The visit came at a kind of watershed in my life & was especially meaningful for that reason.” I was very touched by her comments, and later they gained even more significance to me.

It was a relatively small amount of money, $164. I sent a note to UMass and Northampton women’s centers asking for proposals and set a time for representatives to meet with me at Green St. to decide the use of the money. We made our decisions using what I called “the UCM model.”

I don’t remember now what UCM stood for, but I do recall being sent to Boston by the Valley Women’s Center a couple of years earlier to ask the Haymarket People’s Fund for $50 to buy a used typewriter for the drop-in center log and general use. At that meeting, everyone asking for money (radicals from all over New England), sat around in a circle and presented their needs. The discussion went round and round until a consensus was reached as to who would get what. That took part of a second day. We bunked the first night in our sleeping bags on the attic floor of some big house.

At Green St. in 1974, four proposals came in for using the Rich honoraria: the Valley Women’s Union on behalf of the Mother Jones Press; the counselors at Everywoman’s Center; The Feminist Counseling Collective; and the Chomo Uri staff. Using a consensual decision making process, it was decided that the money would be divided between the Mother Jones Press and Chomo Uri staff to help defray the costs of a mutual misunderstanding.

Chomo Uri was conceived as a feminist arts journal as part of the Feminist Arts Program in Amherst. They had contracted with Mother Jones, the new feminist press in Northampton, to print the first issue. The finished print, however, didn’t meet the reproduction standard expected by the publication’s staff, particularly the photographs. They refused to accept the job. Since the two groups had come to an agreement before the funding meeting, it was relatively easy for the rest of us to see the importance of resolving the issue.

I sent Adrienne a note of thanks with news of the results. The connection set me to dreaming of her, literally. Later that summer, I wrote a crush confession to her.  What follows is her beautiful response.

July 21 (1974). Dear Kaymarion. First, thank you for sharing. There were moments during the brief time in N’Hampton when I wished there were more time, no conference, space in which we could really talk. I came away very much moved by what I saw of you, of your life. I should tell you – in exchange for your trust in me – that only shortly before the time I was in Northampton a woman I’d known for about 2 years & I had become lovers. I was feeling extremely vulnerable, not like being public at all, and I was grateful for the sense of private space you gave, the peacefulness of Greene [sic] St., the kind of energy I felt flowing from you & from several of your sisters there.

And so I can accept your fantasy out of a whole part of myself that was for years stifled & in abeyance. I feel at times I’ve been slowly waking from a long sleep punctuated by dreams I didn’t understand. And at the same time I resist women-romanticizing-women – I’ve done, I hope, with the romantic, I want us – all women- to see each other as we are & fight against mythification. Yes, we should have our fantasies & share them – work with them as with dreams – they are a source, a metaphor for our deep psychic life –

Just now I feel like someone on the edge of a new landscape which is nonetheless full of familiar shapes & colors – Unconsciously I’ve known it all my life & now I am here in my waking life. You’ve lived there awake longer than I though there must be 20 years between us. It’s strange to feel you sensed without words where I was – though not strange really.— I’d like to believe we’ll meet again & really talk. I have always loved women. Talked best with women, but never so much as now, in a whole relationship with one particular woman.

Please forgive me if I’ve answered you in any clumsy way. Your letter moved me very much & I wanted to meet you with the same honesty –  with love  Adrienne. 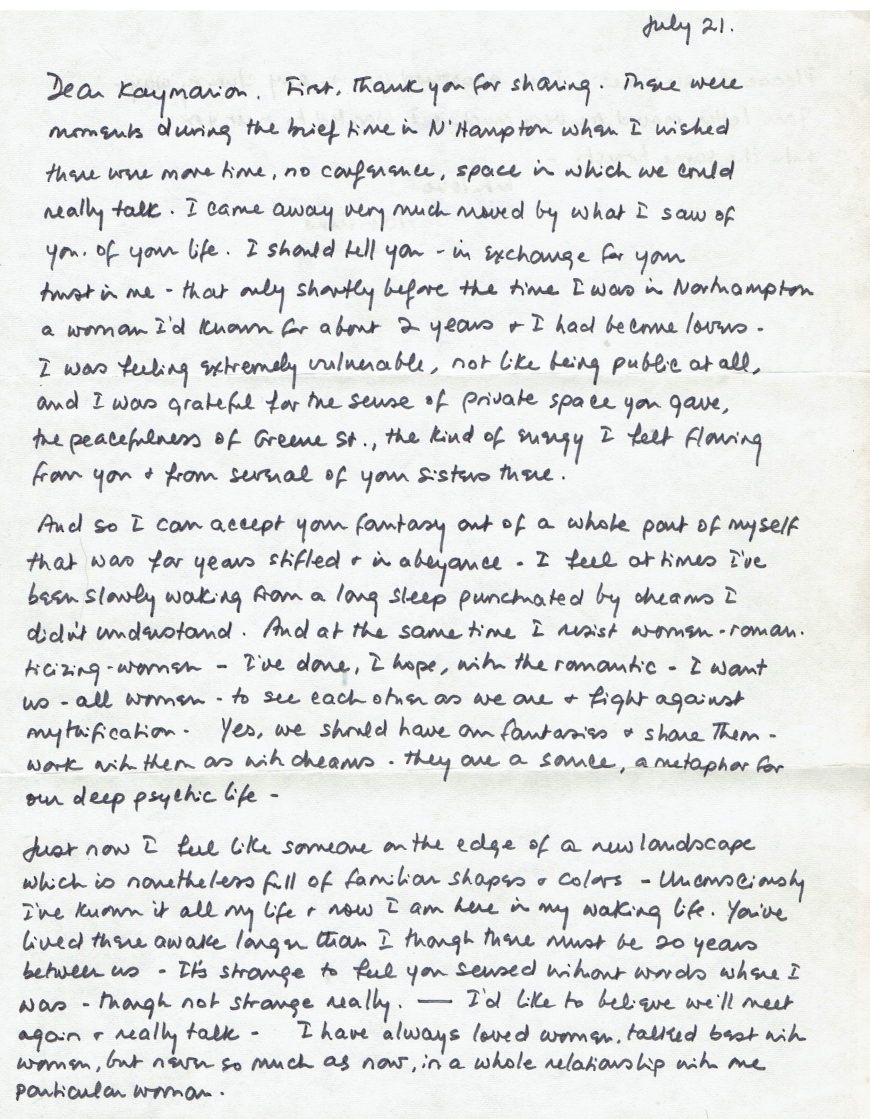 I believe I saw her next at Hampshire College. She was reading from her most recent work. I don’t remember it or the year. Perhaps it was an early version of Women and Honor: Some Notes on Lying, Twenty-one Love Poems, and/or Of Woman Born, but I do remember that in the course of that evening, Adrienne said  publicly that she was a lesbian. 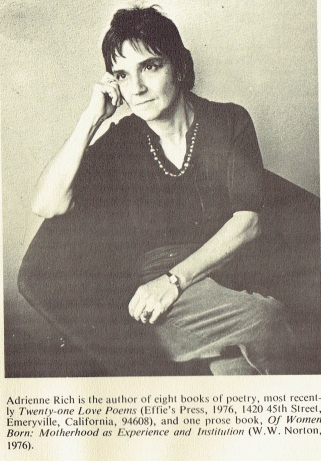 this first essay includes some of the history Adrienne Rich and Michelle Cliff’s stay in Western Mass (Montague) and editing of Sinister Wisdom 1981-83. The second link includes Rich’s reflection on what she started learning about relationships with women, very early as a lesbian.