In early 1975, Northampton lesbians began to see and hear about strange men in town taking photographs and recording license plate numbers. At least one lesbian home was mysteriously broken into. Many in the Northampton lesbian community feared that the community was under scrutiny by the FBI.

Already that year, at least seven lesbian/women’s communities nationwide were being investigated by the Federal Bureau of Investigation, in hand with Federal Grand Juries, ostensibly to track down Weather Underground fugitives Susan Saxe and Kathy Power.  Warnings spread through alternative media, including the hand-stapled, mimeographed Lesbian Connection that had begun to be read in Northampton’s Lesbian Community. Here’s an excerpt from the May 1975 issue: 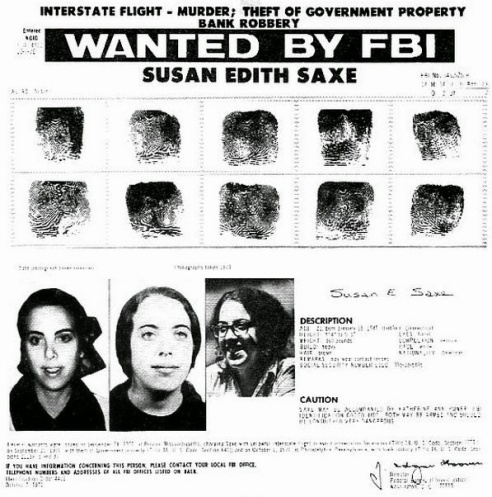 Across the country, those refusing to talk to FBI agents were often subpoenaed to appear before a Grand Jury. Anyone who  continued to fail to cooperate was jailed indefinitely for “contempt.” Even after Saxe was arrested in Philadelphia in March of 1975, radical news media reported that investigations had been expanded and, nationwide, at least seven lesbians and one gay man were imprisoned for their silence.

Saxe’s letter after her arrest was circulated nationwide. It was published in Northampton in Old Maid, Lesbian Gardens’ first publication, Spring 1975.

Many feared the Government was attempting to infiltrate and destroy the Lesbian/Women’s Movement as it was doing to other progressive groups. Fear of being outed as lesbian or gay, or loss of child custody by single mothers, was being exploited in these “fishing” expeditions. According to reports in radical media, the questions being asked included details about others, not only their names and roommates but also their political and sexual activity, bars visited, meetings attended, who else was there and the content of discussions.

In this climate, a local Grand Jury Information Project was begun in May 1975 in Northampton. It was a cooperative effort housed at the Northampton Women’s Law Collective on Main Street with volunteers, as well, from the Valley Women’s Union, Springfield Women’s Union and UMass Everywoman’s Center.

Over a four month period, the Project did rumor control in the Valley and circulated printed material at events and information meetings on FBI and Grand Jury abuses and individual legal rights, including the right not to talk to investigators. As awareness spread, local lesbians and feminists began to take precautions, educating housemates and neighbors, and reporting suspicious behavior to the Project. Some feminist therapists and counselors went so far as to destroy or otherwise secure client records to further protect confidentiality. 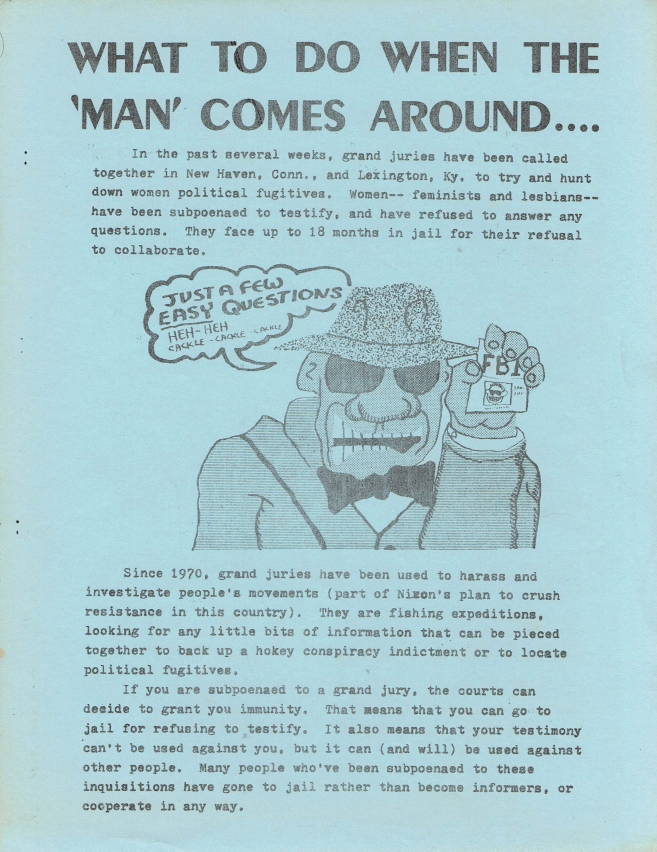 The increasing paranoia had a humorous side. Peggy Cookson recalls that lesbians at Green Street took apart their MaBell black bakelite telephone handsets to cut out suspicious looking little green phone components thinking they were ”bugs” (recording devices). The resulting increase in static was taken as confirmation that the phone lines were indeed being tapped, rather than that the green bits were actually anti-static devices.

At the end of summer, tension was eased a bit when a Northampton Lesbian issued a letter to the community stating she had been subpoenaed and appeared before a Grand Jury in New York. She said she had refused to answer any questions and the queries seemed to be connected to her past involvement with Irish politics and not focused on lesbians. Though this investigation appeared to focus on an individual, it was only the first of several attempts by the authorities to gain information about local lesbians and the community in order to identify “subversive” elements.

__Ann McCord. Remarks to author about client records. Ann was a counselor at Everywoman’s Center and member of the Feminist Counselors’ Collective.

4 thoughts on “Did the FBI Come To Town?”