The printed word was essential to the spread of radical ideas and information in the 1970s, both the means to reproduce pages and to circulate the resulting papers. Any information that challenged the dominant narrative was simply not available in the mainstream newspapers. It wasn’t broadcast on radio or TV, and was not available at newsstands, bookstores, or libraries. Valley Feminists and Lesbians, as well as Gays, out of necessity, created their own news media, literature, and distribution networks, joining others in the region and nationally.

The dearth of factual information and critical thought was so great in the 1970s that it resulted in many new groups immediately forming libraries. These collections of all kinds of hard-to-find printed material were brought back from events outside of the Valley and ordered or subscribed to by mail. I saw these pamphlets, small paperback books, newspapers, and magazines make their way into libraries at the UMass Student Homophile League/Gay Liberation Front office (where I was a co-coordinator), and in each of Northampton’s Valley Women’s Center , Lesbian Gardens, and Common Womon Club. All these groups had the physical space to shelve them.

Most new local groups also produced a newsletter for members. Archives today often house odd-appearing local ephemera from this period such as the Student Homophile League newsletter included above, unevenly printed in splotched typewriting. While a  very few groups (early Springfield Women’s Center) employed the purple-lettered ditto process to duplicate pages, the AB Dick mimeograph machine was indispensable to most groups. The usual run was under a thousand copies. This was how the Valley Women’s Center printed its hand collated, stapled, and addressed monthly newsletter. The use of that machine was lent by VWC to other groups, including the Student Homophile League.

A cousin of the silk screen printing process used for posters and T-shirts, the mimeo impression to be printed was cut in the coating of the fabric stencil with a manual typewriter, another indispensable tool of the time. The mimeo machine was cranked by hand and had a center tank filled with ink. One sheet of paper at a time was printed with ink that poured from the tank through the stencil wrapped around it.

Subscription to these mimeographed newsletters, as well as to newspapers, were often exchanged between groups, forming valuable networks of information on the latest news, actions, gatherings, upcoming events, research findings, and analysis. Despite the risk of snooping and sabotage, most of these were circulated by [snail] mail to group members and other groups. Given the high cost of postage, it was well worth the effort to, if at all possible, get a non-profit bulk mailing permit. Mailing lists became valuable commodities, as was any technology that helped transfer the address onto the pieces to be mailed other than handwriting each.

Mimeograph duplication wasn’t limited to little local flyers or newsletters. Some of the national and regional news sources we came to rely on here in the Valley also had mimeo origins. Made available at the one-shelf Sweetcoming Bookstore in Lesbian Gardens, Lesbian Connections, the oldest still existing national Lesbian publication, started as a stapled mimeograph in 1974. Gay Community News, the New England radical newspaper produced in Boston, started in 1973 as Gay Community Newsletter with a two page mimeo. Their publication New England Gay Guide 1975 was also mimeographed. Yes, the stapler was also a very necessary tool.

Frequently found today in archives are the now brittle and tanned tabloid-formatted newspapers, offset printed on cheap newsprint. These were produced by larger organizations in the Movements.  They were distributed by mail, carried in bundles to and from various events or gatherings, and eventually sold locally at alternative newsstands or bookstores. The national feminist news became available in Off Our Backs,  the offset printed newspaper started in 1970.

Also available for reading and sale at Northampton’s Valley Women’s Center at 200 Main St. was the now classic women’s health handbook, Our Bodies, Ourselves, in a 1970 first edition as a large stapled newsprint pamphlet titled Women and Their Bodies: a Course printed by New England Free Press. This had been developed from mimeographed handouts created as the course was taught to Boston-area women in 1969.

1970 first edition of what was to become Our Bodies, Ourselves, the classic manual of  health information that had been hidden from women or misinterpreted by Patriarchal medicine.

Before the existence of the internet and its electronic media, this meant having, or having access to, an offset press for issues reproduced in large numbers, which meant a thousand or more. “Access to an offset press” meant finding a printer who had, not only a press, but also tolerance, if not acceptance, of radical material. Regionally, the New England Free Press, which opened in 1968 in Boston, began to fill that need. They printed the Northampton Women’s Film Coop’s first catalog in 1972. For the most part, they produced new radical left material. However, feminist and gay pamphlets printed by them included “The Woman Identified Woman;” “Out of the Closet: A Gay Manifesto;” “The Politics of Housework;” “The Myth of the Vaginal Orgasm;” and Witches, Midwives and Nurses. I was able at the time to find most of these at events and in the Valley Women’s Center library.

Valley feminists briefly broke into tabloid-formatted print with single issues of the Full Moon in 1972 and 1973.  The printer is not credited, but the directory included in each newspaper traces the regional development of the feminist network, including its publications. 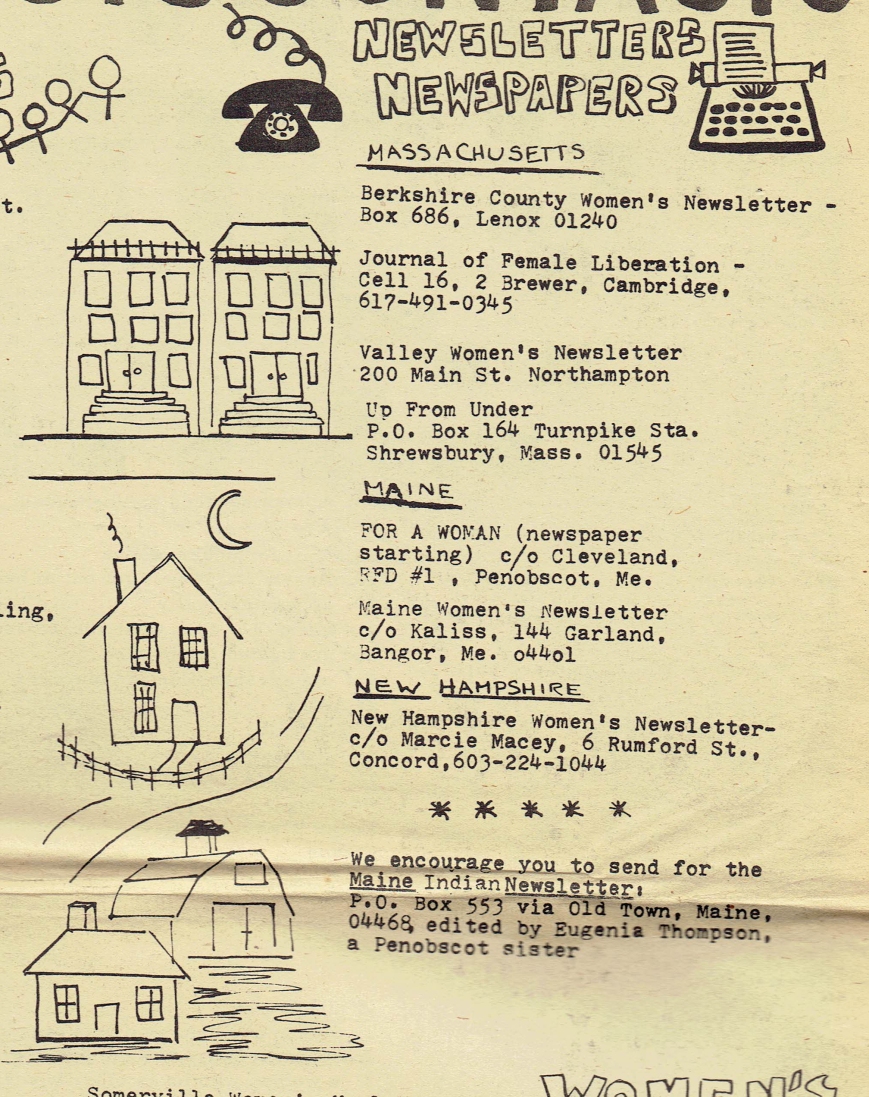 It was a significant event when women bought a used Chief press and set it up in rented space on Hawley Street as Mother Jones Press in July 1973. With this, Northampton joined the Feminist Press Movement* that was spreading across the country. Some of what they printed included the Valley’s first Lesbian newspaper, Old Maid; the second Women’s Film coop catalog; flyers used by Valley Women’s Union in organizing waitresses; and the 1973 Women’s Guide to Amherst-Northampton produced by the Women’s Information Project.

These printed materials were not readily available in Northampton in the early 1970s unless one visited Lesbian Gardens or the Valley Women’s Center, attended an event, or subscribed.  Materials became more visible and available when the radical Spark Bookstore collective formed in Florence in 1974 and moved to downtown Northampton space, on the second floor next to the Calvin Theatre in 1975.  They made sure to include lesbian , gay and feminist publications and advertised that in Dyke Doings. A similar effort began on the UMass Amherst campus in 1975 as the People’s (Women’s) Newsstand and Spread the Word Distribution.

There is also a feminist and Lesbian literary publishing history for this period, as well as a history in film and broadcast, which I will address in later posts. The initial publishing efforts here laid the groundwork for the 1979 milestones of the first publication of the Valley Women’s Voice newspaper and the opening of Womonfyre Books on Masonic Street in Northampton.

Throughout the 70s, mimeograph continued to be relied upon. When the Valley Women’s Union was evicted from 200 Main Street, they moved their mimeograph machine to the upstairs of the Common Womon Club, where it continued to be used by radical groups until it was supplanted by photocopying.

__History of Off Our Backs. http://www.triviavoices.com/an-interview-with-carol-anne-douglas.html#.Weya_Yhrw2w The history of this longest running feminist paper, and past and current media influences, is discussed in an interview with OOB staff woman Carol Anne (“Chicken Lady) Douglas posted in the now online journal Trivia.

__ Our Bodies, Ourselves history. http://www.ourbodiesourselves.org/history/preface-to-the-1973-edition-of-our-bodies-ourselves/

__*A brief overview of the Women In Print Movement can be read as a sample “look inside” on Amazon.com. See this Introduction by Jaime Harker and Cecilia Koucher Farr to This Book is an Action: Feminist Print Culture and Activist Aesthetics. University of Illinois Press. 2015. https://www.amazon.com/This-Book-Action-Feminist-Aesthetics/dp/025208134X/ref=sr_1_1?s=books&ie=UTF8&qid=1527873535&sr=1-1&keywords=this+book+is+an+action#reader_B016LLE3H2