The dojo’s name was a private joke, known in the Lesbian feminist community as the Nutcracker’s Suite and in public as the Northampton Women’s Karate and Self-Defense Dojo. That wry humor was also reflected in the mural painted on the side of the squat little lavender stucco building housing the school at 68 Masonic Street.

There is a photo of the mural taken in the summer of 1978 by Elizabeth Samit and reprinted fifteen later in Northampton’s Lesbian Calendar. Dojo student, and later instructor, Beth Holt’s VW bug can be seen parked next to the building. The mural faced the fire department next door and so confronted the town’s firemen every day as well as those passing by. The mural and the institution it decorated were among the results of more than half a decade of anti-rape organizing in the Valley and a connection to the larger national movement.

Photo and artwork copyright Elizabeth Samit a member of the Hestia Mural Collective, used by permission

Lesbian feminists were part of the Valley’s movement to begin ending violence against women, including rape. In 1973, after a series of rapes in Puffton Village, (an Amherst apartment complex lived in by many students), the newly-opened Everywoman’s Center (EWC) formed an action group to address the violence.

It was essential to begin breaking the silence around this hidden and often misnamed form of assault, one of the many forms of abuse endured everyday by women. The next month, EWC, with the Valley Women’s Center in Northampton, convened a conference on rape, including a speak-out. Recruited to do the poster, I asked Jackie, another Green St. tenant, to pose on the floor of my room for the drawing I used in its design. 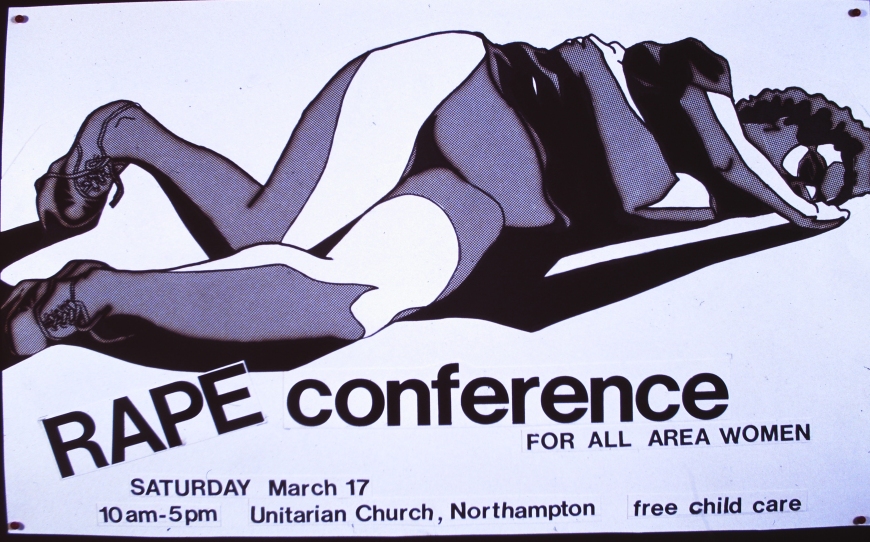 At that speak-out, an increasingly emotional crowd of women filled the Main Street basement of the Unitarian Society to witness woman after woman share her experiences, many for the first time, myself included. Organizing immediately began in Springfield to include rape crisis intervention as one of the areas to be supported by the brand-new Springfield Women’s Center. A brief report on the conference and an action resolution were included in their dittoed newsletter dated March 21, 1973.

Feminist-invented actions were needed on multiple fronts; public education and individual self-defense training to prevent assaults, physical and emotional support for victims in crisis, advocacy on behalf of victims with police and courts, education of law enforcement, and changes in laws concerning rape and victims’ rights. There was no easy fix in working on behalf of assaulted women. These activists had to deal with the varied competency levels and sexist attitudes of police departments and prosecuting attorneys across the three Valley counties.

As with many other issues addressed by the Women’s Liberation Movement in the U.S., the thinking and experimentation of feminists in other cities helped inform those locally. In the ad hoc library on the Common Womon Club’s porch, I found a manila file folder of articles on women and violence. There were mimeographed papers from feminist activists around the country, including guidelines for counselors helping rape victims, the Detroit Women’s Crisis Center (1973); the goals and objectives of a city-wide anti-rape campaign led by an Ann Arbor Michigan municipal advisory board, (1975); and a guide to self-defense courses and martial arts, NYC Women’s Martial Arts Union (second edition 1974). 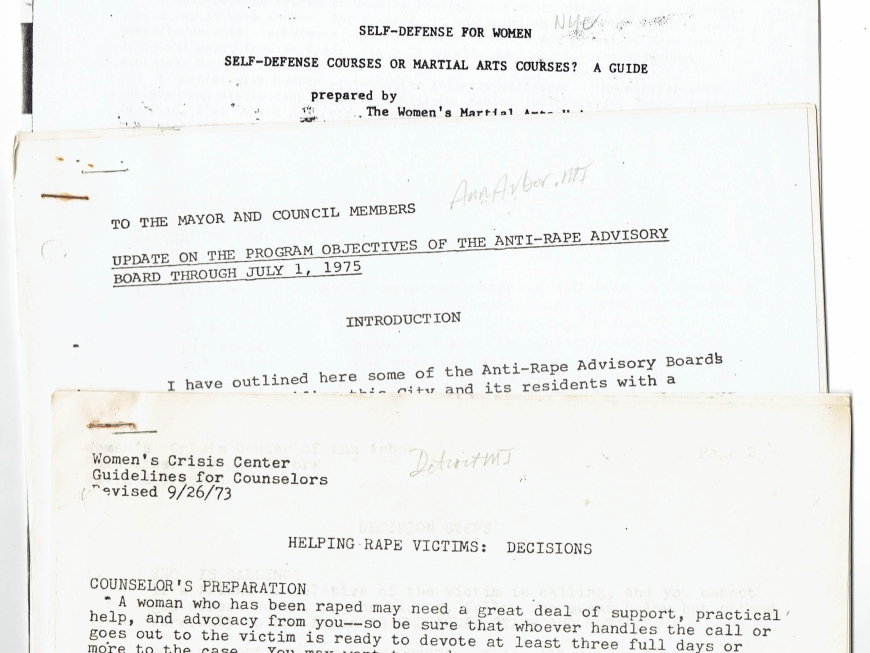 Mimeographed literature from around the country was gathered and read in the Valley as feminists invented ways to address the violence against women. These examples from a folder in Common Womon Club’s library that may have been a Valley Women’s Center/Union subject file.

In 1974, the Springfield Rape Crisis Hotline was started by volunteers in the Springfield Women’s Center. There is a note in the Herstorical Chronology of the Valley Women’s Movement  that a “Sep 6, 1975 benefit for Springfield Rape Crisis Center was disrupted by police, one woman beaten. Protests made to Mayor of lack of police cooperation.” Can anyone add details or documentation for this?  They were an activist group, witness a clipping I came across in which women disrupted a lecture. 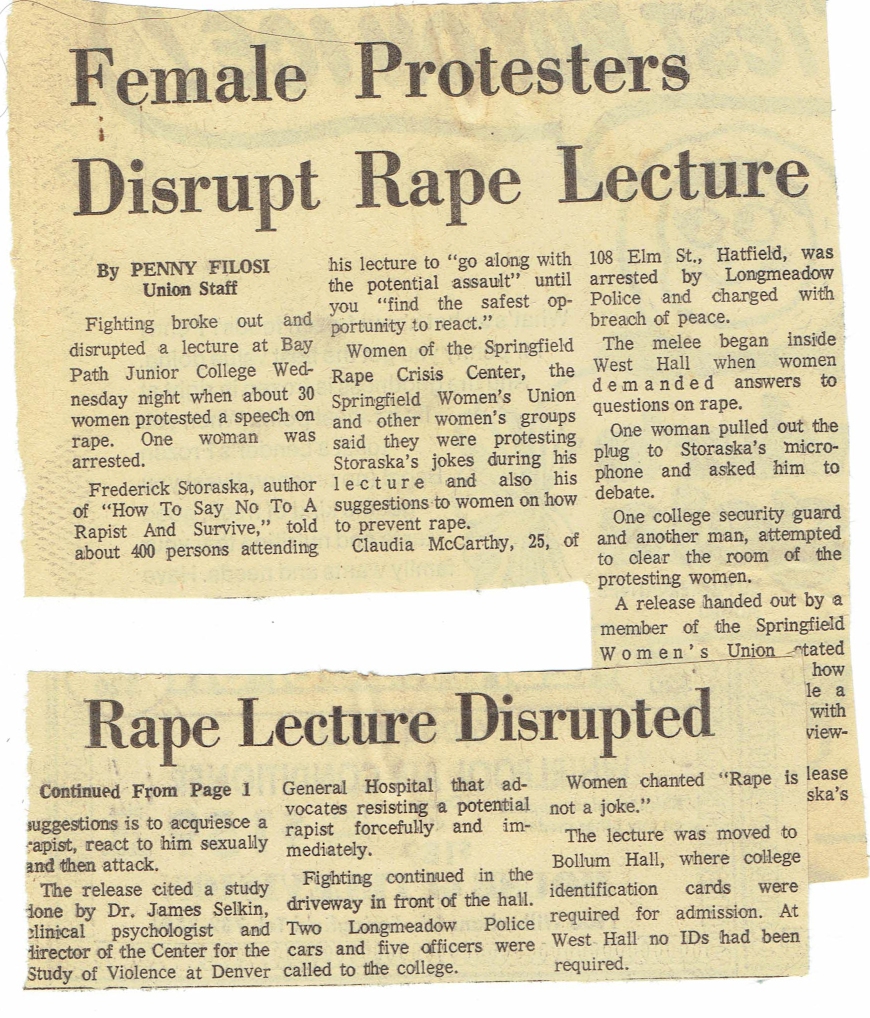 One of the long-term goals of the Springfield Center was to establish a school for self-defense and karate.  The need for this was also felt in Northampton during the hot summer of 1975, with a noticeable increase in physical harassment of lesbians on the streets of Northampton in reaction to new activity at the Lesbian Gardens and Gala Café. This prompted not just the formation of a slightly trained ad hoc Dyke Patrol to protect lesbians coming and going from lesbian events in town, but also greater awareness in the lesbian community of the need for self-defense.

One result was the formation of self-defense classes at the Lesbian Gardens  space over the Valley Women’s Center at 200 Main Street. The Lesbian Gardens was where I saw a woman in a karate gi for the first time. She was Cindy Shamban, an instructor. A year later, in 1976, Cindy teamed up with Pat Turney to rent fourth floor space in the Masonic Building at 25 or 26 Main St. in Northampton and open “a wimmin’s self-defense and karate school.” Separate all-wimmin’s and all-lesbian classes were offered on a sliding cost scale. There was also a karate class for little women age 5-13. 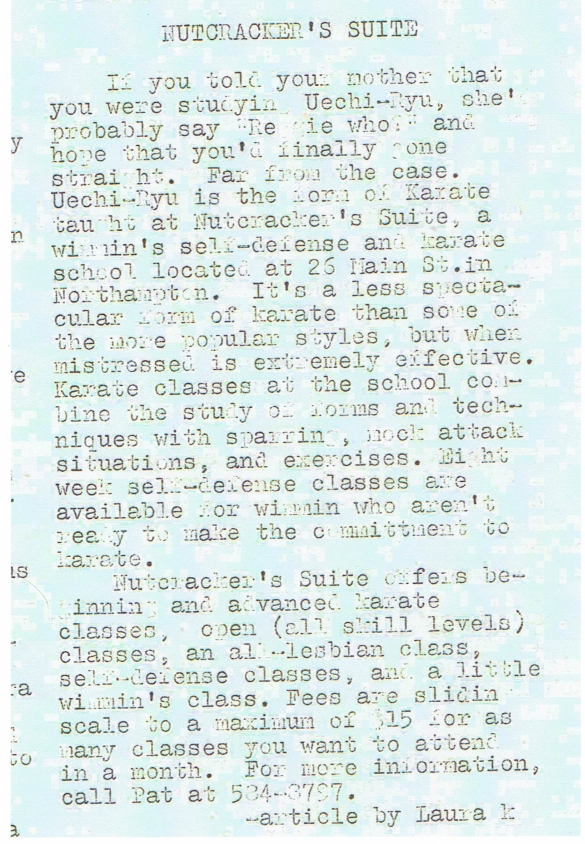 Self-defense demonstrations and workshops became included at women’s conferences in the Valley along with more – and more specific – planning for support for victims.  In 1976, a Rape Advocate/Counselor Training Conference, based on feminist principles, was held by Family Planning at their newly opened Center Street, Northampton offices. The Springfield Rape Crisis Center closed, though it is unclear if this was because the Women’s Center lost space. The hotline may have continued but became housed at the Springfield YWCA as HERA, the Hotline to End Rape. I have no documentation for this. Please share if you do. Everywoman’s Center in Amherst began doing Rape Advocacy/Counseling. 1976 also saw the first anti-rape march in the Valley, held in Northampton by the Valley Women’s Union.

Undated [May 14, 1976?] and unattributed publicity for Anti-rape March

Ceres Inc, which bought the buildings at 68-78 Masonic Street to start a women’s restaurant, evicted the Navy Recruiters from number 68 and rented it to the Nutcracker’s Suite in April of 1977.

“Robin and Cindy at the Nutcracker.” View onto Masonic Street. Photo courtesy of Cindy, photographer unknown.

At some point, that mural went up. I don’t know who painted it there, but the design came from the cover of the first issue of Black Belt Woman, published in 1975-76 from Medford Massachusetts. The image is from a woodcut by Elizabeth Samit.

Pat Turney, later named Banshee, became part of the network being formed among women across the continent. She contributed writing to Black Belt Woman, and included the dojo in the sixty page directory of women in the martial arts published by the magazine in 1976.

Pat and the Nutcracker’s Suite organized and hosted the second annual 1977 National Training Camp for Women and the Martial Arts. Ninety women from over a dozen karate styles worked out together for three June days at Hampshire College in Amherst. I had the pleasure of designing the teeshirt for that. The training was reported in Off Our Backs. 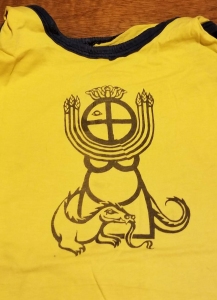 Perhaps because of the training camp, Wendy Dragonfire joined Banshee as an instructor at the Nutcracker’s Suite briefly before Banshee withdrew for further training elsewhere.

Undated [1977] flyer. the graphic on the right is by me and was used as the t-shirt design for the ’77 National Training

Wendy took over the school in September of 1977. Its name changed to the Valley Women’s Martial Arts and in 1978 moved to Springfield. As part of a now national campaign, Northampton’s first Take Back the Night March was held in 1978. Over 1500 women showed up. 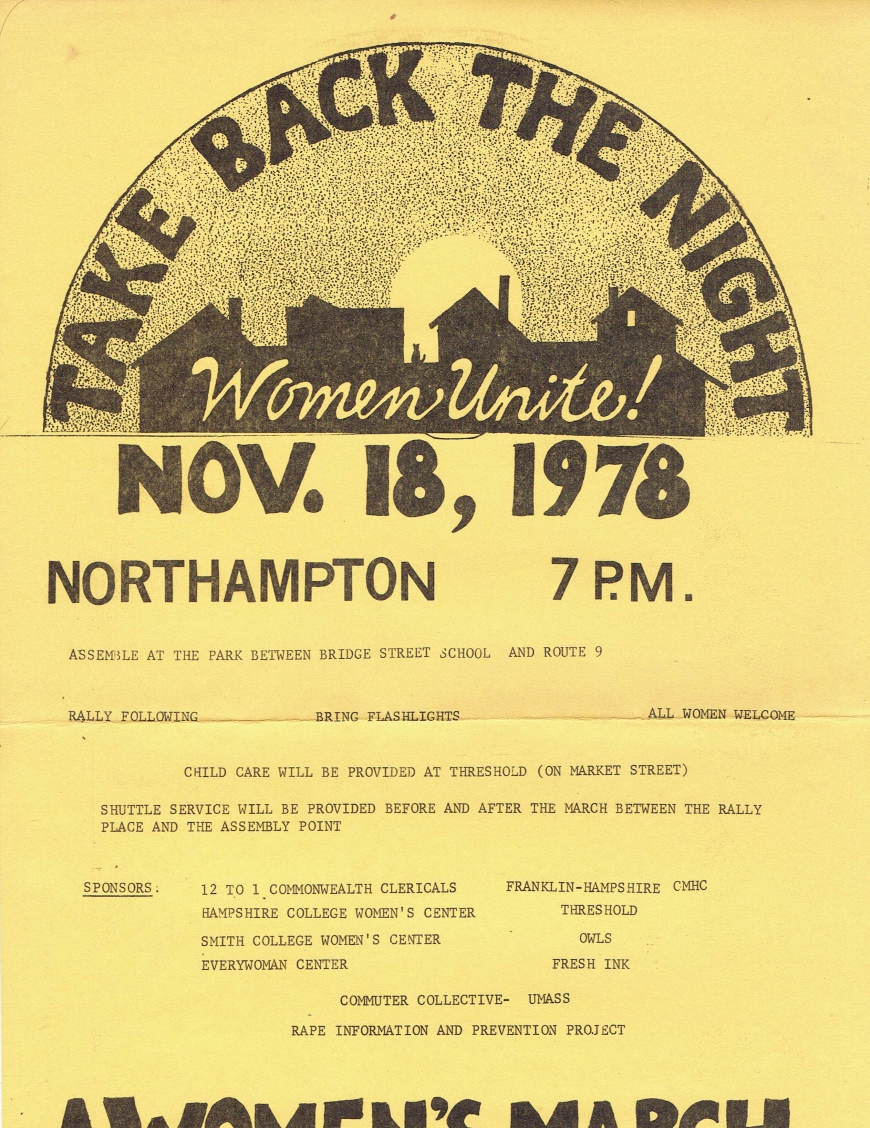 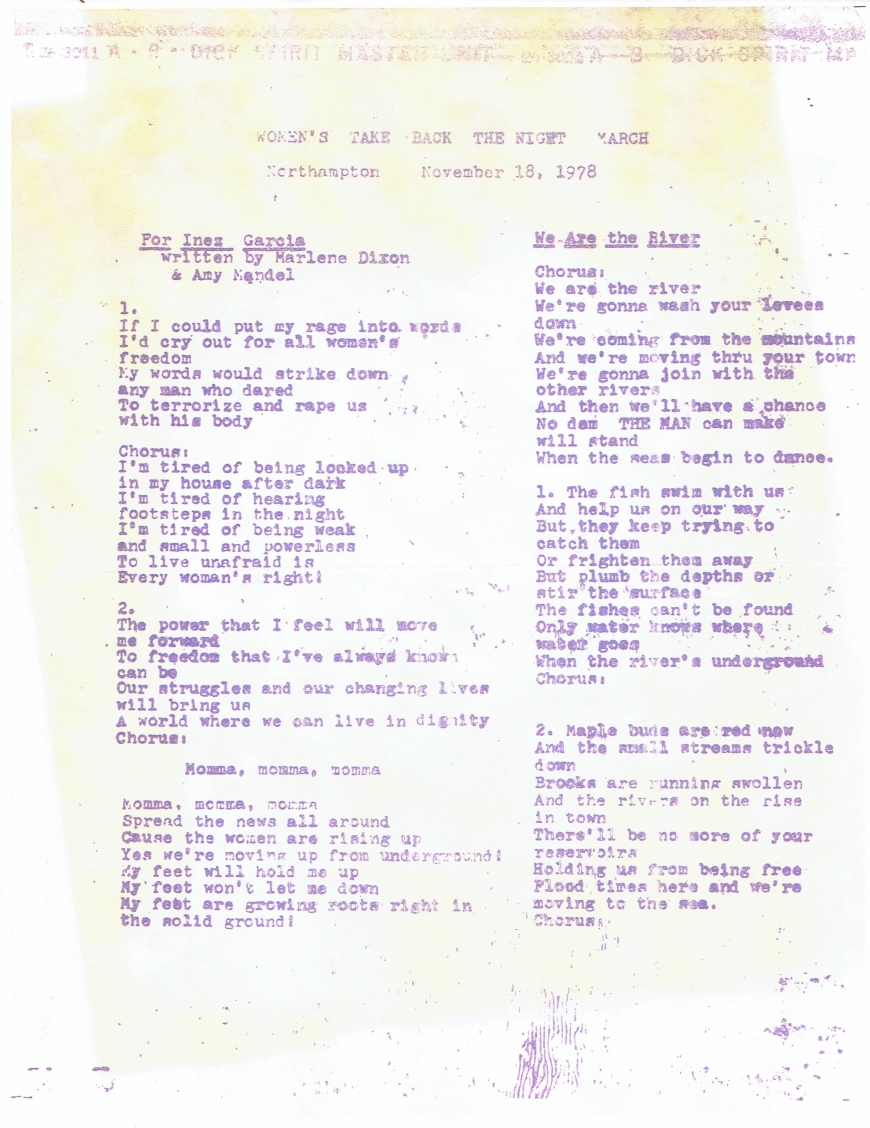 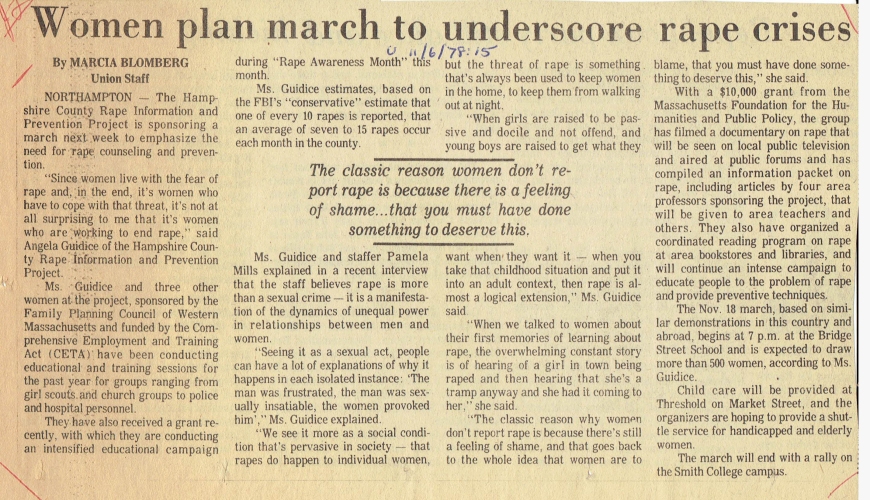 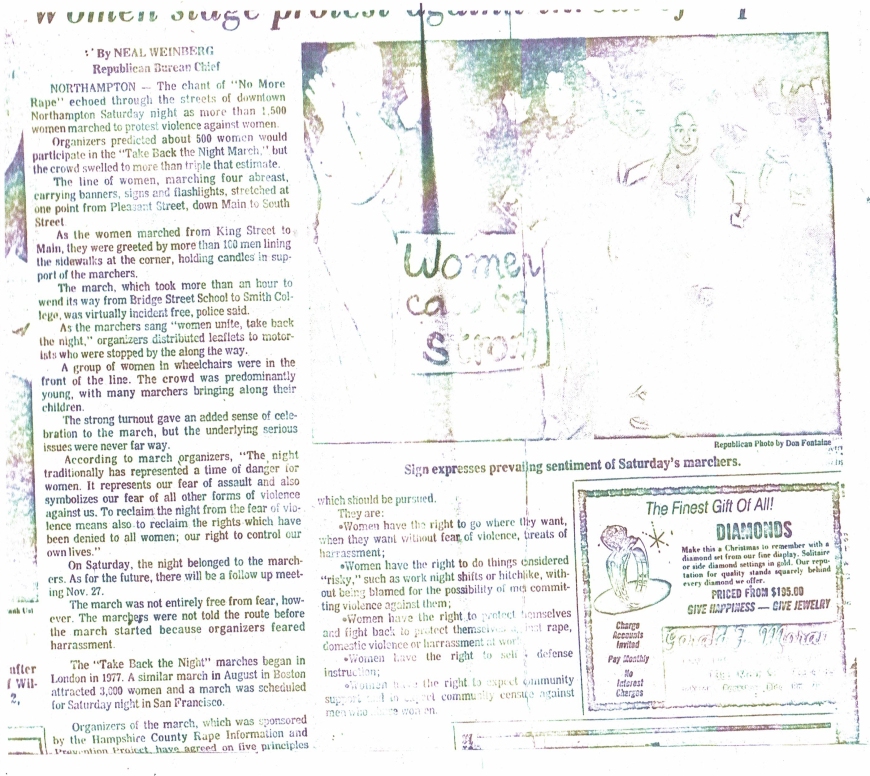 __Black Belt Woman. September 1975. Medford MA. __ Black Belt Woman: Magazine for Women in the Martial Arts and Self Defense. Online description/contents of issues. “Historic magazine of the women’s martial arts and self-defense movement arising out of the second wave of feminism, published from 1975 to 1976.”  http://www.greenlion.com/BBW/bbw.html

One thought on “Nutcracker’s Suite and the Anti-Rape Movement”